A JAMScript program has C and JavaScript functions with some of them prepended with the jasync or jsync keywords. In this section, we refer to such tagged functions as JAMScript tasks. A task is considered local if it runs in the same node as the invoking function while the tasks running in a different node are considered remote. A JAMScript task runs in a single node; that is, a given task is not distributed across multiple nodes. 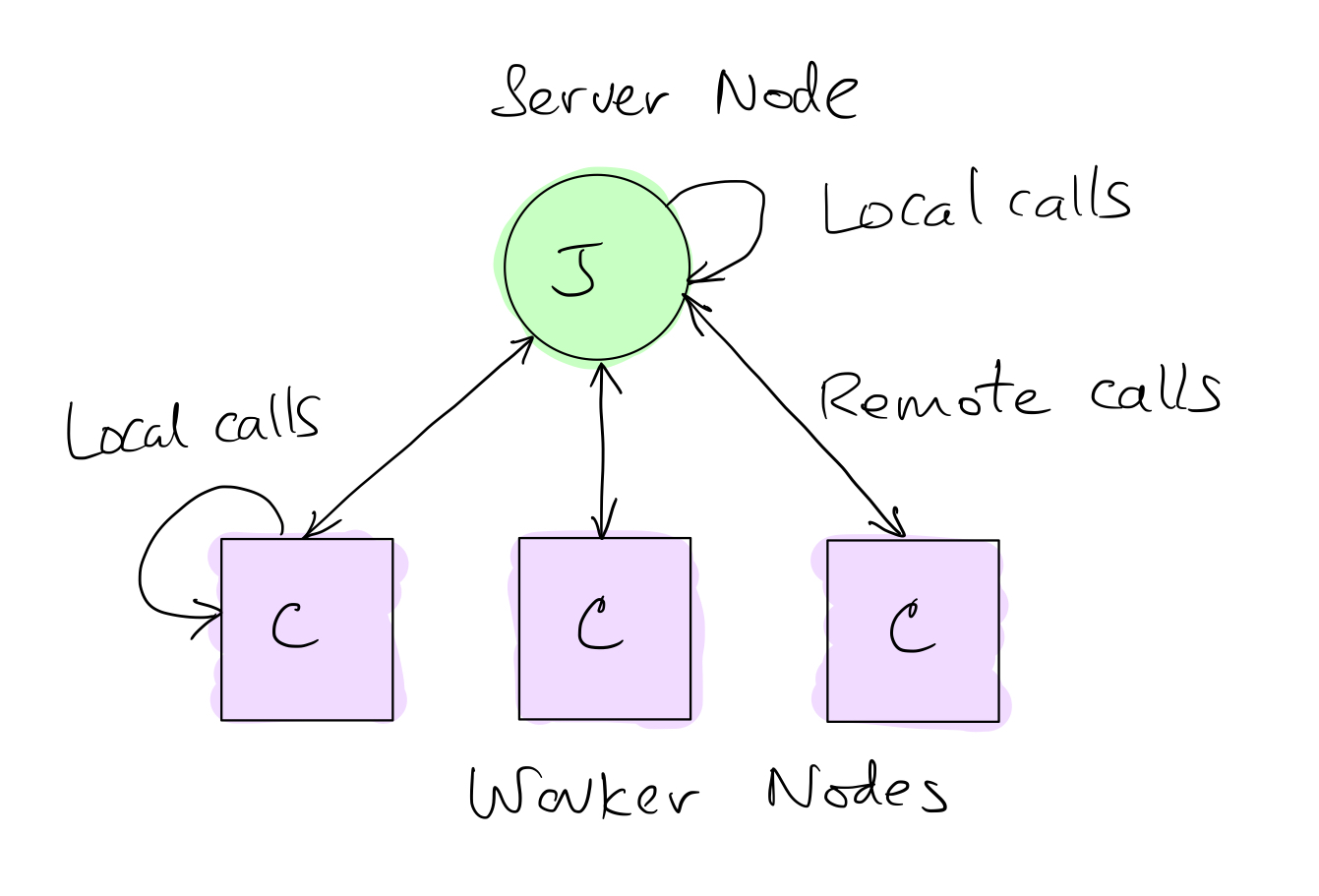 Local tasks can be defined at the worker and controller sides. Here, we illustrate the definition of local tasks in the C side. Consider the following C side program.

You will notice that all the calls made by the C program are local. Therefore, this worker (C) program can run with a NULL controller (empty J program). The local tasks are invoked just like any other function. However, because the local tasks are asynchronous (defined using the jasync keyword), there is no return value from them. In this example, the localme and localyou tasks run concurrently. For compute only tasks, you need insert jsleep(n) to yield the coroutine thread; otherwise, you would not have the intended execution.

To view the output of the program (in this case from the C side), run the following command.

The primary use case for local tasks is to perform concurrent processing at the worker. All local tasks and the main program run on a single kernel-level thread because JAMScript is a single-threaded language like JavaScript.

The above example shows how to multiplex two task that print messages to the terminal. In addition, we can also have local tasks that read data from the controller as illustrated in an example shown later.

Remote tasks are important for the controllers and workers to interoperate. Lets consider a slight variation of the above program with two local tasks in the worker. In the program below, we just have one of the tasks localme. However, instead of calling that task locally, we call it from the controller.

The J node runs the very simple program shown below.

In the above program, the J node is calling localme as a remote task. You can see that the J node spawns a different instance of the localme at each call, which runs forever. Therefore, we will run out of the resources at the devices after few invocations.

Typically, the remote tasks run to completion within a given duration so the resource usage at the worker side would not keep increasing like in the above example.

In the C side, the function exported from the J side needs a prototype definition so that it can be used there.

The functions that perform the calculator functions such as add, subtract, multiply, and divide are defined as synchronous tasks.

The C side shown below calls the synchronous tasks to perform the required calculations. The C call blocks until the task is complete and a result is available from the task. The function prototype (required) in the C side defines the return type of the task.

In the above program, worker (C) is calling synchronous tasks provided by the controller (J). A call from the worker leads to a single execution because a worker connects to a single controller. Now consider the reverse situation where the worker is hosting the synchronous task. There could be many workers underneath a controller. So when the controller calls the synchronous task, we have many concurrent runs at the different workers. The controller needs to wait for the completion of all task runs and return an array of all the results. To collect all the results, we need to have all the tasks completing around the same time. The task runs at the different workers can take different times due to processor or data differences. Therefore, the only constraint JAMScript makes is to start all the runs at the same time across all the workers.

The J program is shown below. It implements the synchronous remote task getID, which the workers call to get their identifiers. Periodically, the controller is calling the synchronous task tellid to get the list of workers underneath it. Because the workers periodically refresh their identifiers by calling getID, we should see an array of different numbers printed out by the program below. The number of elements in the array corresponds to the number of workers underneath the controller.

Consider the following program in the C side. In this program, through a local task (trycallback) we are calling remote task printMsg. The call, however, is different from the previous ones – here we are passing a callback as the last parameter in the call. The callback is a special type in JAMScript – jcallback.

The J side (controller) is supplying a callback function (in this case poke) when it calls the remote task callworker. If you run this program with 4 workers, you will the callbacks arriving as groups of 4 at the controller (i.e., one from each worker).

JAMScript is designed so that programs written in the language can run in a distributed collection of nodes in cloud, fog, device levels. Optimally mapping the program components into the distributed system formed by the cloud, fogs, and devices is part of ongoing research in JAMScript.