The figure below shows how a controller and three workers would be organized in a single device. In this example, all workers are under the controller in the device. The device is self-contained – that is, the JAMScript program loaded into the device can run even if the device is offline. 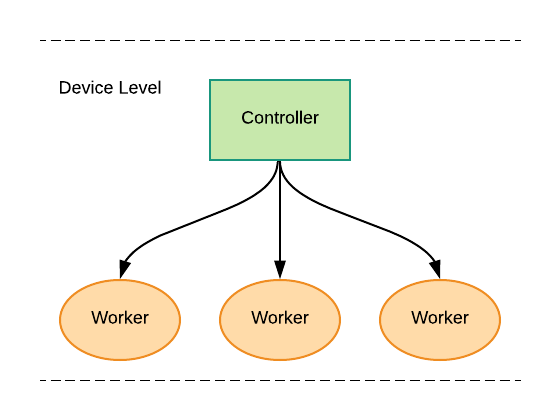 The following figure shows a larger configuration with controllers at the cloud, fog, and device levels. The workers are at the device level. A JAMScript program creates a hierarchical configuration when it is run across multiple devices as shown here. 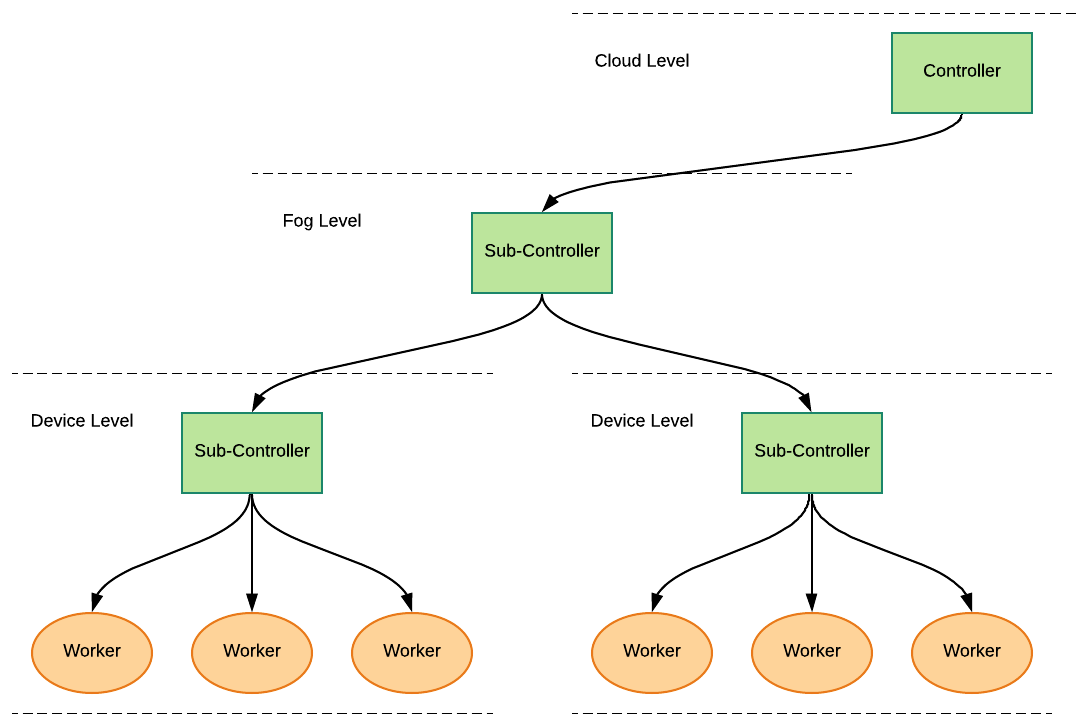 The JAMScript runtime is responsible for creating the hierarchical configuration among the controllers and workers and different levels. Therefore, JAMScript is highly suitable for creating and maintaining computing structures across collection of nodes that are constantly changing in proximity to one another – for example, vehicular networks.

Anatomy of a JAMScript Program

Asynchronous JAMScript tasks are run using user-level threads. So, they cannot include any blocking calls like sleep(). You will notice that jsleep() is used to delay the execution of the JAMScript task by the given amount of time. 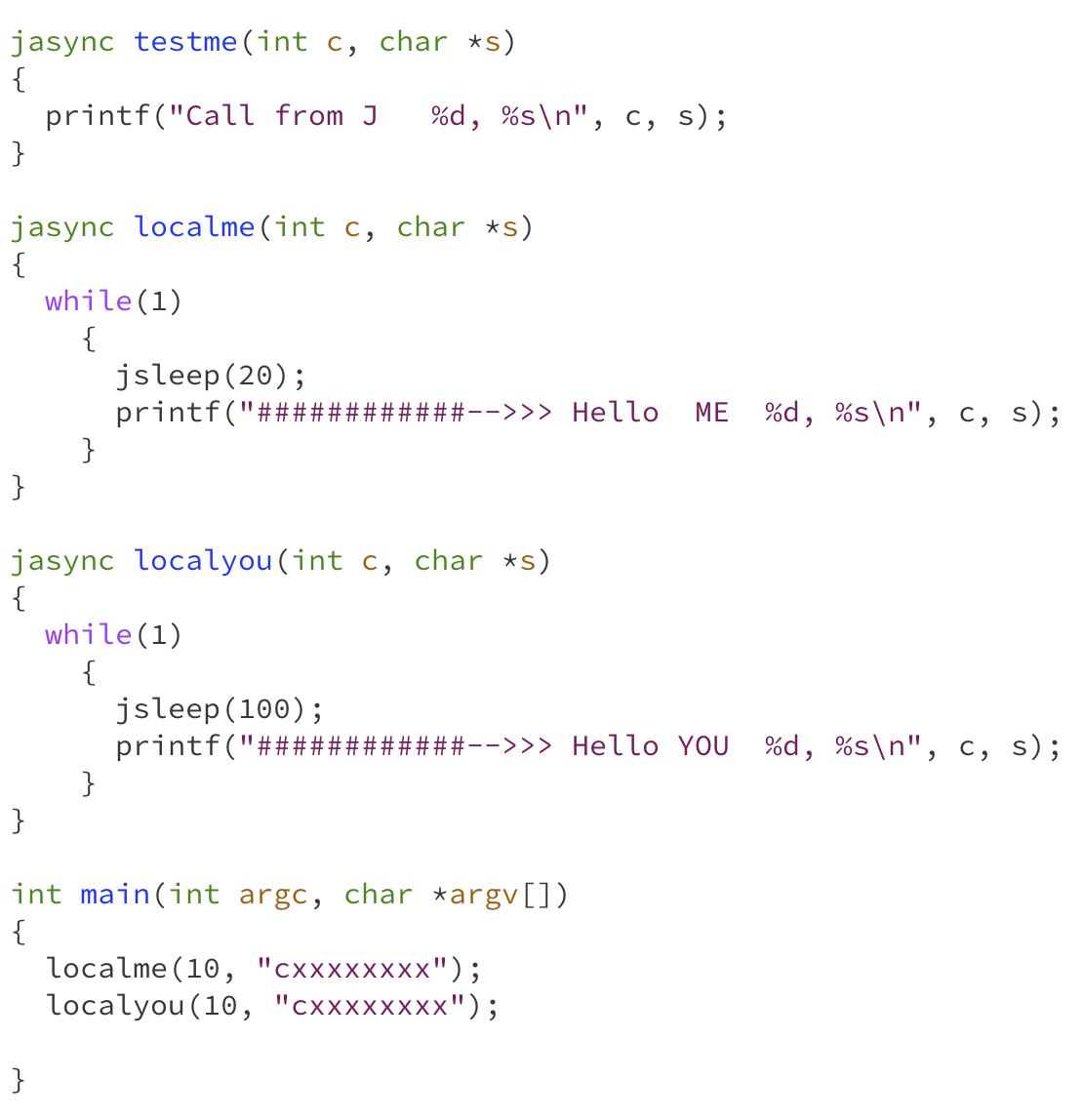 The main() function launches both JAMScript (local) tasks. The local tasks run concurrently. Because we are using user-level threading in JAMScript, the jsleep() is essential for yielding the execution context to the other concurrently running threads.

One of the interesting aspects of JAMScript is the auto discovery of JAMScript program components. A JAMScript executable can be run in different ways: (a) only in a single device, (b) in a single fog and many devices, and (c) cloud, fog, and devices. There is no special configuration file to indicate which configuration is used at any invocation.

Consider an example JAMScript program where the worker is creating some data and pushing it towards the controllers. A worker could have one to three parent controllers depending on the configuration we use. That is, a worker could have a device level, device and fog level, or device, fog, and cloud level controllers.

The program shown below is the C side of the JAMScript application for logging data. It selects a data string from the 10 available names and logs it to the controller. To log it essentially assigns the local variable (in this case it is buf) to name. You can note that name is not defined in the C side. The main() function of the program just starts the logdata() local task, which is responsible for pushing one data item every 1000 milliseconds. 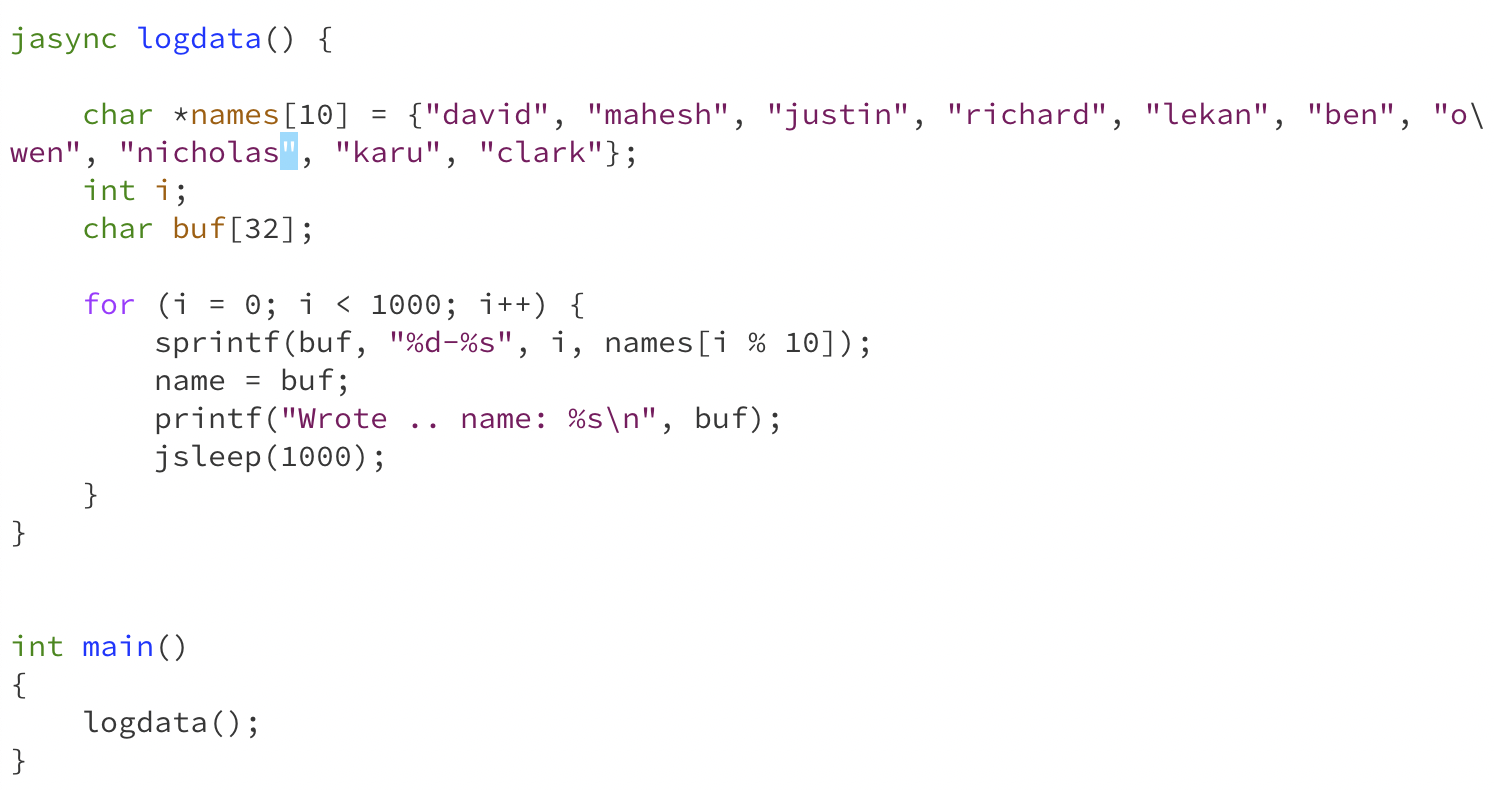 The J side of the JAMScript application is shown below. The first thing you will note is the jdata section. It defines name as a string logger. The logger is a stream of time series data. That is, as the worker logs data we will create a new data item in the stream. The number of streams would correspond to the number of workers (each worker has its own stream). The controllers can also write to the logger.

The J program is doing two things: it is writing to the logger and printing the stream contents. To write to the logger, the controller needs to get access to its own stream and then push the data item to that stream. 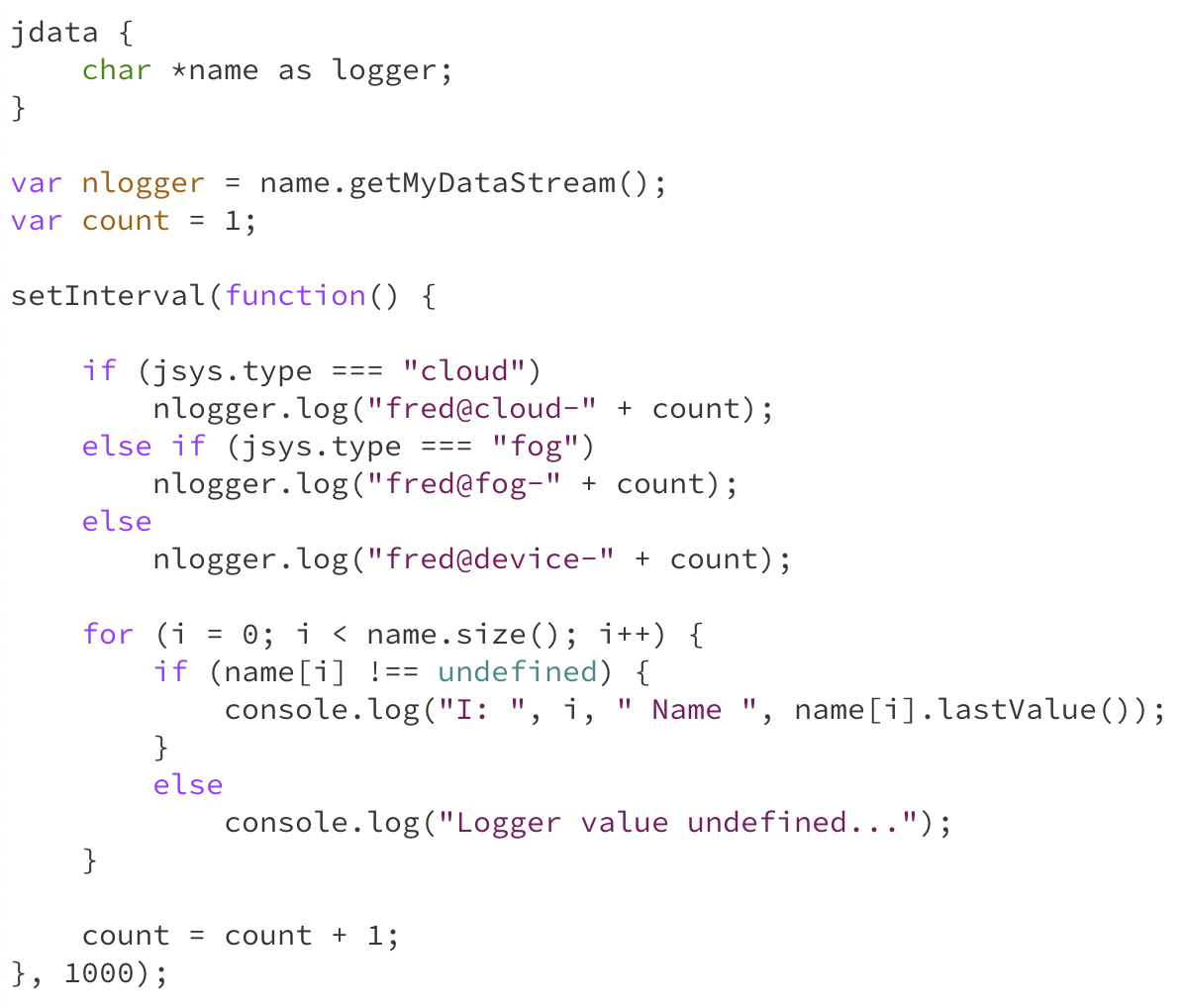 The figure below shows one fog and two devices running the above program. The fog-1 is started with the following command line.

The stringlog.jxe is the JAMScript executable that is obtained by compiling the source file using jamc. The program is run under the test1 name. The JAMScript runtime connects all the program components with the same name and executable filename (there is no authorization checking step while connecting the program components). The --data option specifies the data store URL. Because all three components (fog and the two devices) are run in the same machine, we need to specify URLs with different port numbers. 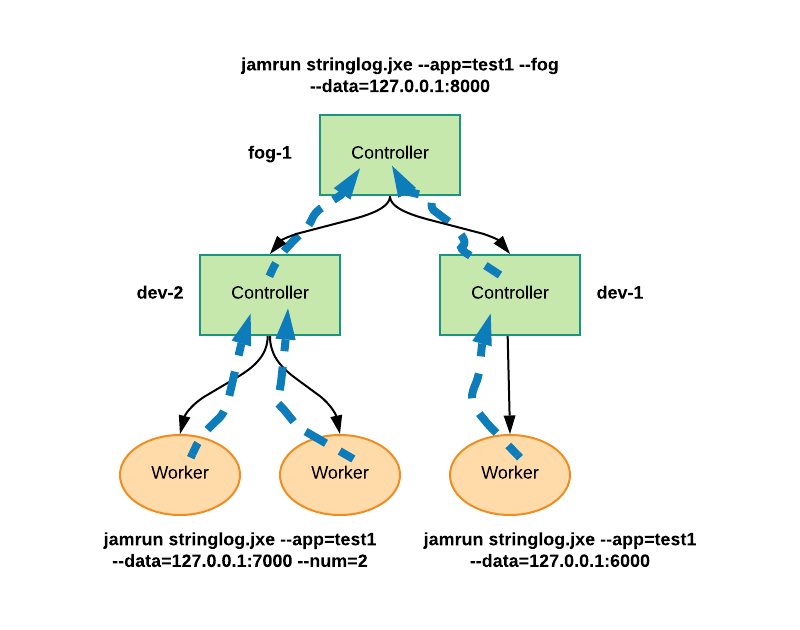 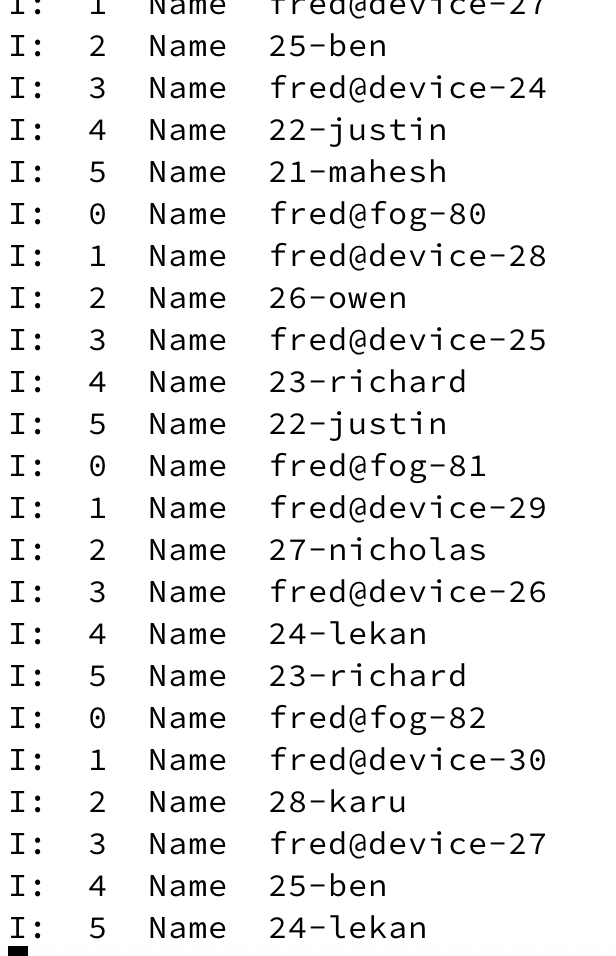 The listing below shows the output at dev-2. You can note that it shows the streams from the two workers and the values from the controller. 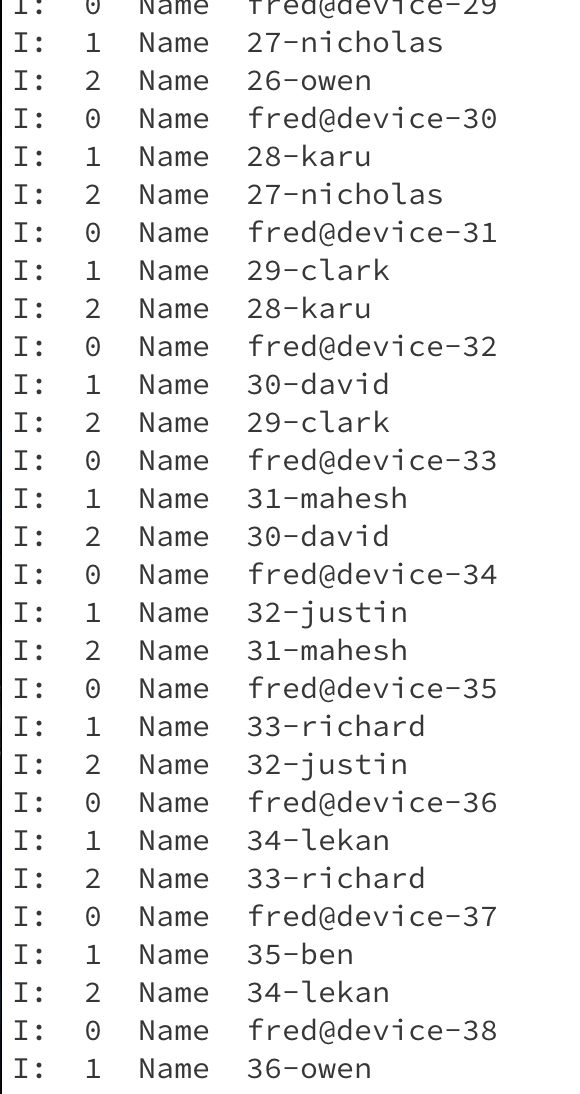 JAMScript has special support for interfacing fog computing with mobile IoT. Using a simple example scenario we illustrate some ways JAMScript can help the use of fog computing in mobile IoT. Let us consider a scenario where two fogs are located in a straight line (e.g., road segment). A vehicle is going back and forth on the road segment and we want it to be associated with the closest fog at any given time. The tasks launched by the vehicle must get executed at the closest fog. Also, when the fogs execute remote tasks the vehicles in their zones would execute those calls and not the vehicles in other fog zones. The same goes to data streams created by the loggers.

The C side of the JAMScript program is shown below. It is a very simple program with a local task that is logging a value every 90 milliseconds. 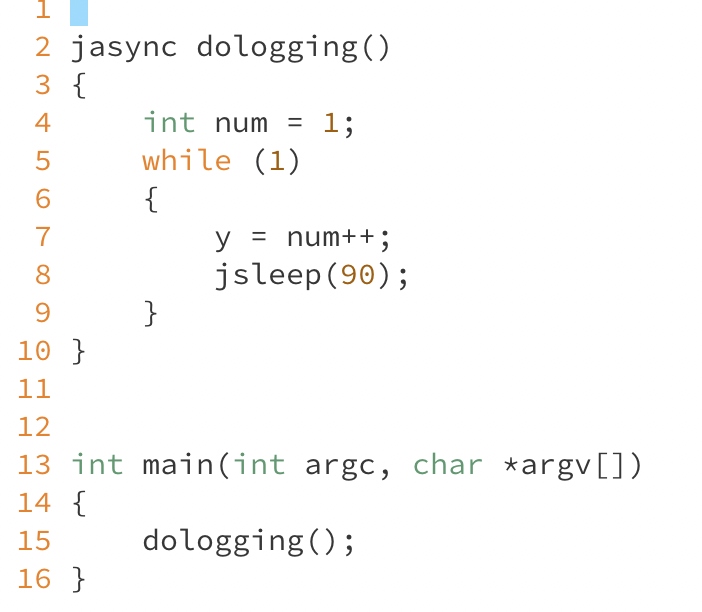 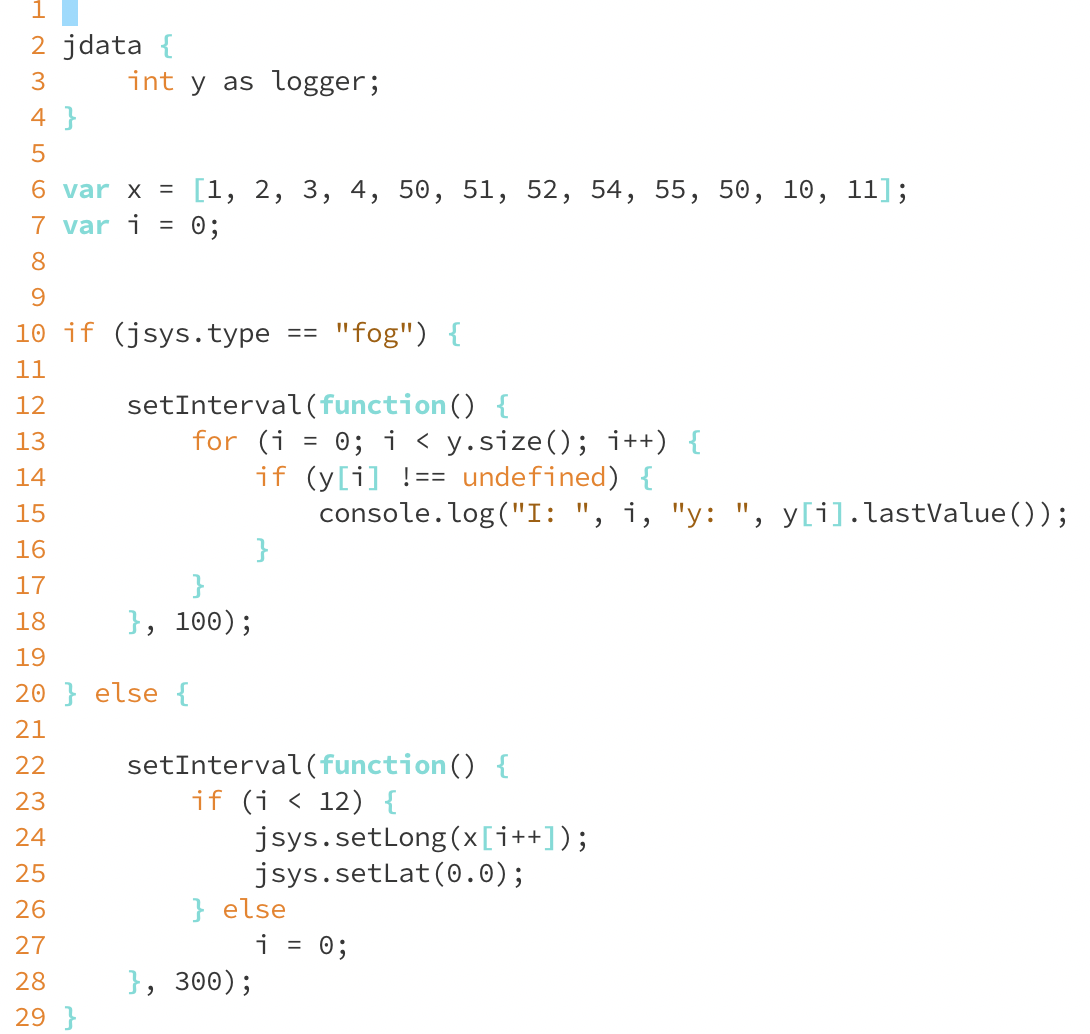 The output of one of the fog servers is shown in the figure below. As we can see the output from the device is reaching one fog and it switches over to another fog. 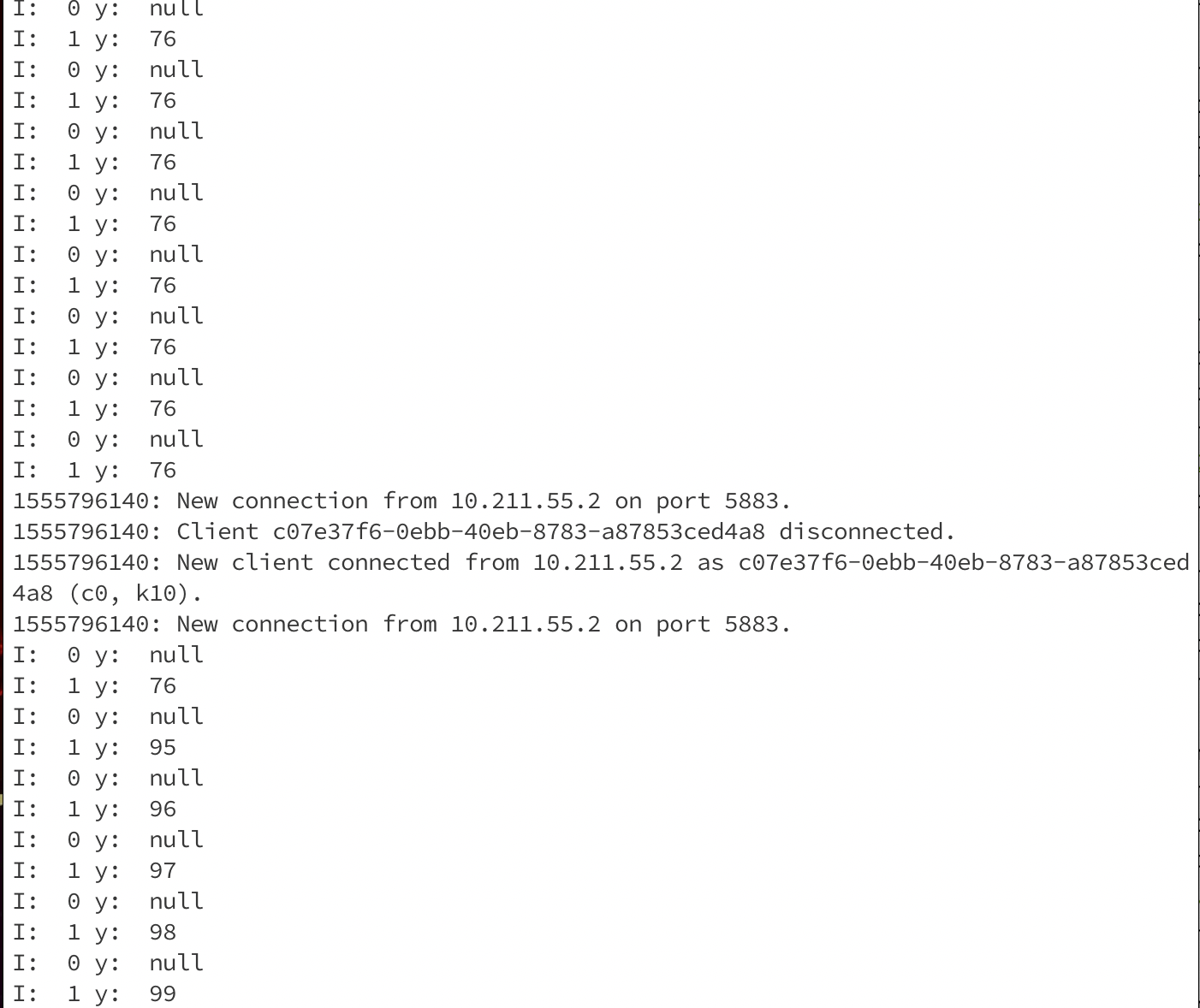