In JAMScript, nodes are independent (i.e., have separate address spaces). All data processing that happens in a node are local to that node. From what we have seen so far, only way of exchanging data between nodes is to use parameter passing (i.e., message passing implemented via remote task invocations).

In edge-oriented IoT, devices can push data at high rate towards the edge for processing. The edge computers (i.e., fogs) process the data before passing it to the cloud. We need another mechanism besides the parameter passing to exchange such high rate data. JAMScript introduces logger as the key mechanism for pushing data from the devices to the fogs and from the fogs to the cloud. The diagram below illustrates a simple scenario that could happen within a single device. We have a controller and many workers in this scenario. The workers produce the data and push it towards the controller. The logger structure organizes the data into streams. There is one stream corresponding to each worker. We can slice the stream at any given instance to get an array of data for analysis. 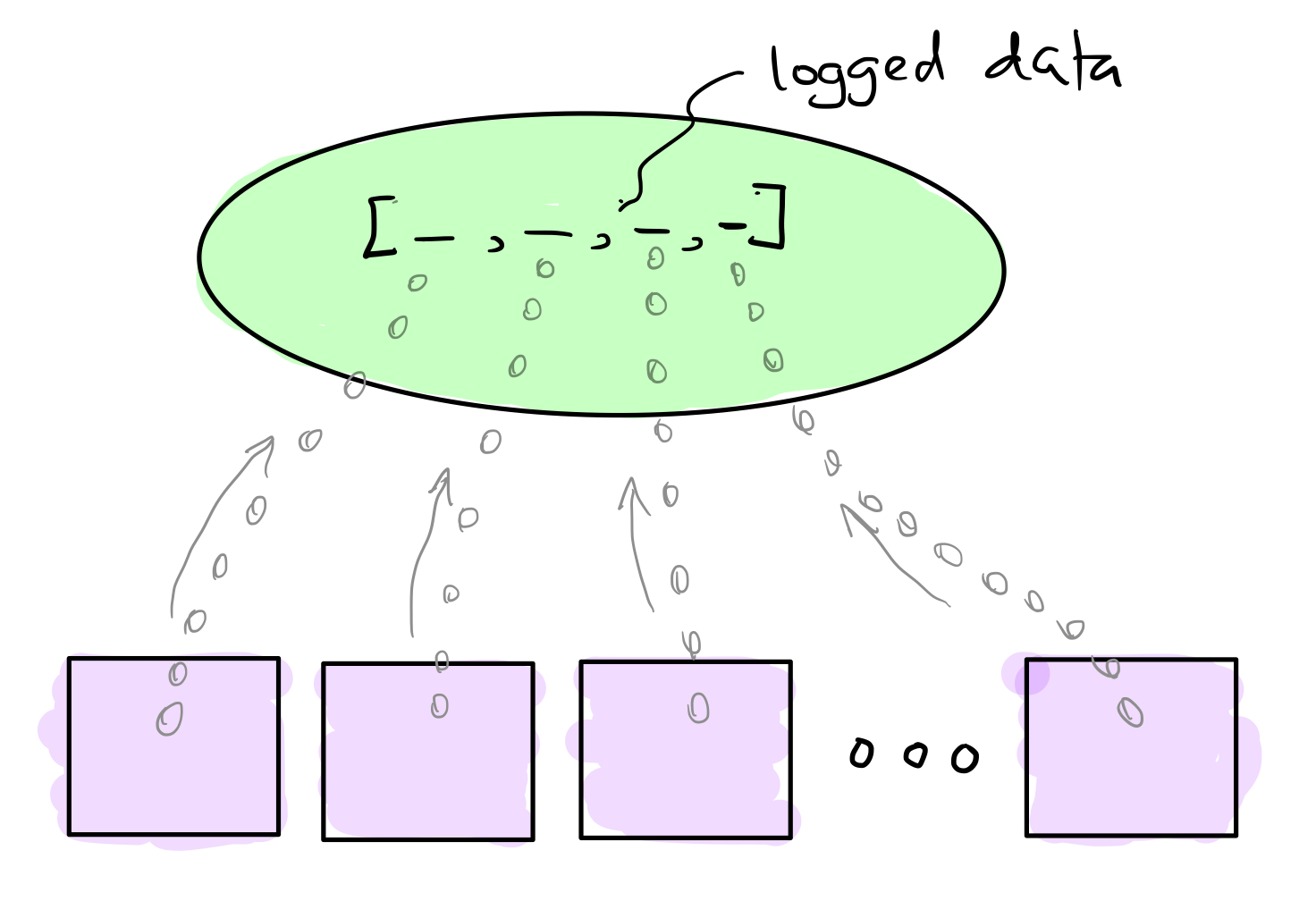 The diagram below shows a scenario where data logging happens from the device to fogs. Still the bulk of the data is produced by workers attached to the devices. The data is funneled through the controllers at the device towards the controller at the fog level. The device-level controller could transform the data or add its own data stream as the data propagates upwards. 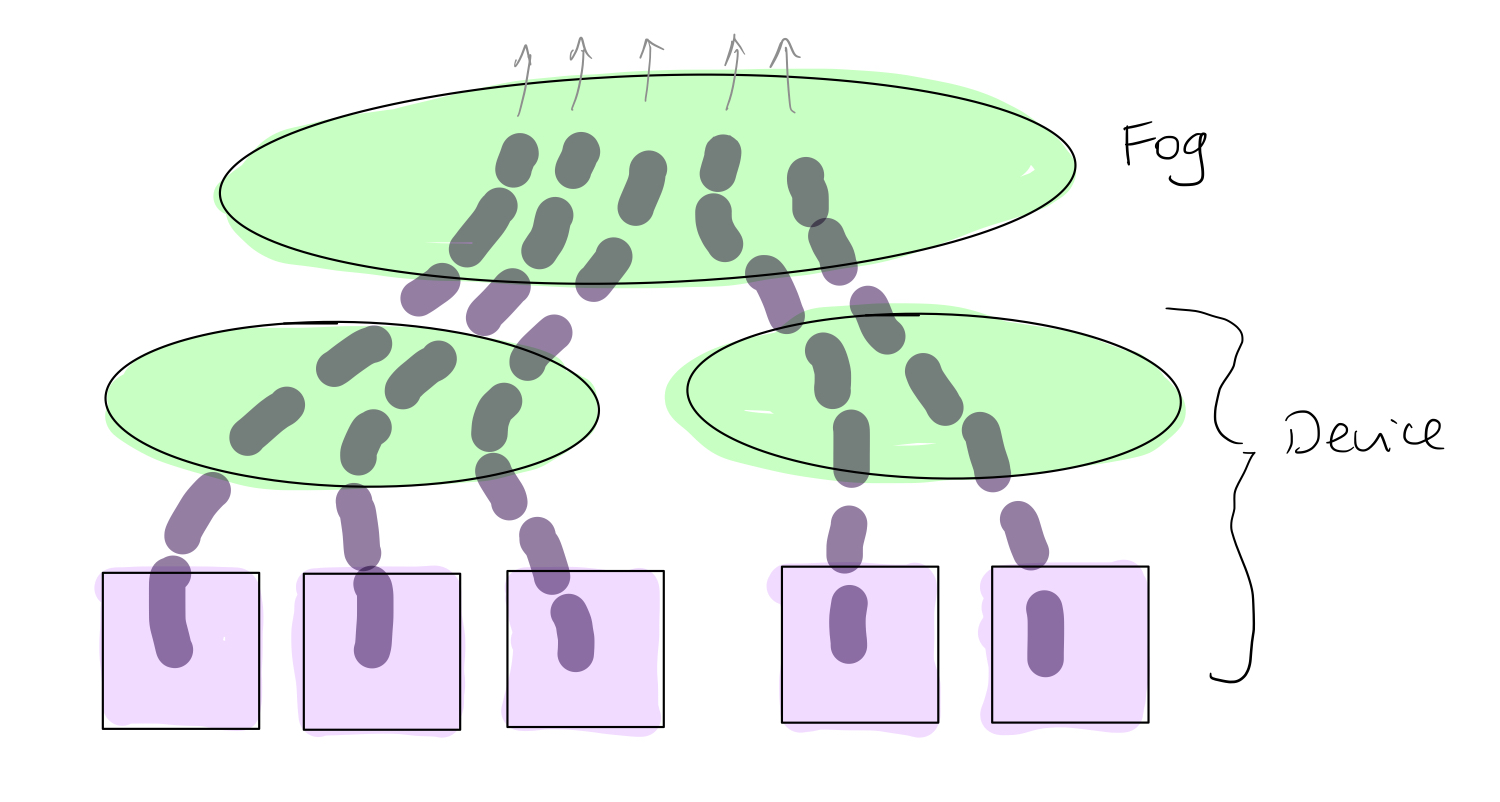 The logger that streams the data from the worker towards the controllers at the different levels is defined using a special jdata section in the J side of a JAMScript program as follows.

In the above definition, q is a string logger (i.e., stream of strings with variable length), y is a stream of integers, and loc is stream of structures, where each structure contains two floats. The logger is an append only stream for the worker. That is the worker cannot read the logger. The controllers can read the logger and obtain values at different positions of the stream. For instance, the controller can get values by arrival time or by position (last, first, etc) in the stream.

The following listings show two code segments: the J and C sides, respectively, of a JAMScript program that is pushing data towards the controller for persistence. The controllers can apply different types of computations (not shown) on the data. In the J side, the variable name is defined as a string logger. Also, the J side (controller) is writing a data stream into the logger in addition to reading the streams that are already part of the logger. The J side is writing different data values depending on its level: cloud, fog, or device.

The listing below shows the C side of the program that writes to the logger. To write to the logger, we simply assign a value to the logger. In this case, name is assigned buf that holds the string to be logged. If jsleep() is used to intersperse the logs, we need to put the logging actions into a local task so that jsleep() can be used.

In the C side, we define a local task to read the incoming value. The local task waits for the value to arrive. Because the braodcaster reception is in a local task, the main thread is still available to process other tasks.

We can have programs that combine braadcasting and logging because local tasks can concurrently handle both tasks. However, any other statements in the local tasks such as reading the terminal must be non-blocking.